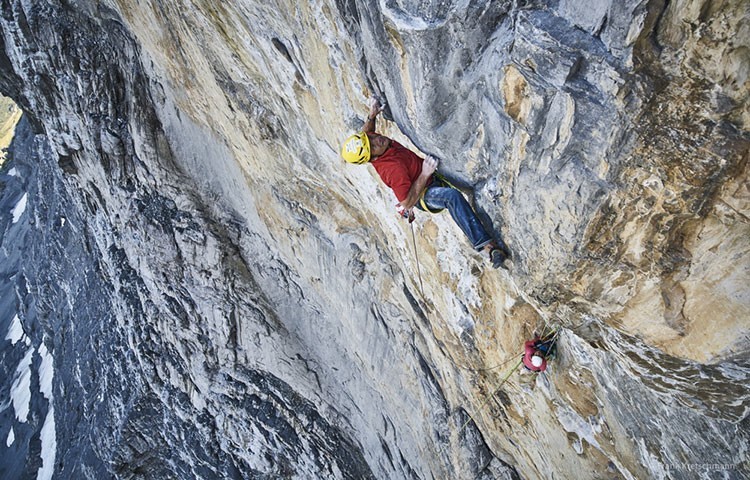 Swiss climber, Robert Schaeli is the second climber to redpoint, La vida es silbar (7c), on the infamous North Face of the Eiger. This 900m, 27-pitch exposed route is on the longest and most vertical pillar of the wall.

First opened in 1999, by Daniel Anker and Stephan Siegrist, La Vida es Silbar was freed in 2003, by Siegrist and Ueli Steck. The route begins at the Stollenloch and goes straight up the Rote Fluh and Czech Pillar. The climb is constantly demanding, varied and enduring, involving numerous slippery slabs, difficult blocks and athletic moves.

Redpointing La Vida es Silbar, North Face of the Eiger
Schaeli, together with Anthamatten, attempted the route thirteen years ago, but a storm surprised them with just four pitches to go. After improvising a bivouac, they were forced to abandon redpointing the climb, due to the weather conditions. For this reason, Schaeli was even more pleased to have achieved their goal: Iâm extremely happy to have achieved the second redpoint of âLa vida es silbarâ, after 13 years!

Schaeli was accompanied on the climb by Mayan Smith-Gobat, from New Zealand. Mayan is one of the strongest big wall free-climbers in the world of climbing. She was also on the point of redpointing the route and, in fact, climbed the whole route except for just a few moves. This may well have been due to her recent recovery after an operation to her shoulder, some months ago. In Schaeliâs words Maya is a very elegant and safe climber. In my opinion, this was the best ever female climb on the Eiger North Face.

âLa Vida es Silbarâ was considered to be the most difficult alpine route on the North Face of the Eiger, until âPacienciaâ (8a) was established. In 2015, the grade was pushed even higher when Schaeli, Robert Jasper and Simon Gitel redpointed âOdysseeâ, 8a+.