by Barrabes  |  Leave your comment
We put the Arc'teryx Cerium LT hoodie to the test on a multi-day trip to the Pyrenees, including ski touring, mountaineering, and ice fall climbing.

Ski touring in the Cerium LT hoodie
Until recently, down jackets have been based on the same basic principles and used to provide warmth after activity or for extreme climates and expedition use. However, the latest generation of down jackets are designed to be used during activity, are more technical, have greater warmth-to-weight ratio, and use fabrics that protect the down from getting wet and losing its warmth capacity.

Arc'teryx has pushed these boundaries to create the Cerium LT hoodie: a lightweight down jacket that works both as a mid or outer layer during ski touring and all-round alpine activities in cold, dry conditions. The Cerium LT hoodie uses down composite mapping, which eliminates the limitations of regular down insulation by adding synthetic insulation to areas prone to moisture exposure.

The Cerium LT hoodie belongs to the brand's LT (lightweight) collection: built with highly durable top performance materials but designed with a streamlined minimalist set of features to provide exceptional light weight. By using a more technical pattern and ultra-light, top-quality materials the weight is reduced without compromising the fabricâs durability. At just 250 g, this is certainly one of the lightest jackets on the market at almost half the weight of jackets with similar properties.

The adjustable, helmet compatible hood and the exceptional compressibility of the jacket when stuffed into its stuff sack are both striking features. It can be taken anywhere as it fits into the smallest space and is so light, yet provides instant warmth whenever you need it. 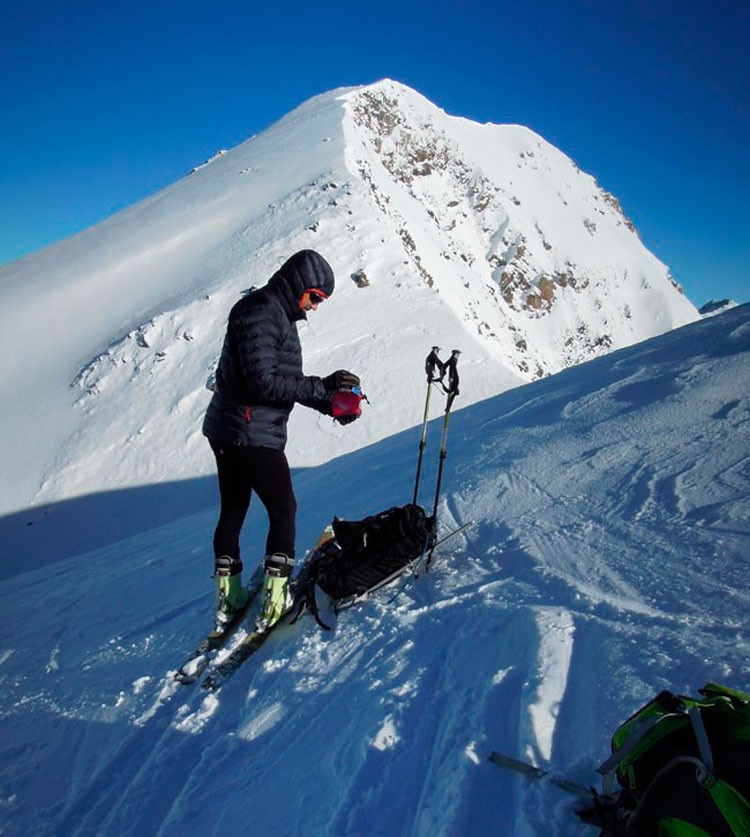 Cerium LT hoodie
DOWN AS A MID LAYER
Using down insulated jackets as a mid-layer during activity is a fairly new trend now on the market. Traditional down jackets have always been used for warmth after activity and rarely as a mid-layer for active sports, because once the down gets damp from sweat, it loses its efficiency. To prevent this problem, the Cerium LT hoodie uses synthetic insulation in areas prone to moisture and has an athletic fit and minimal features to prevent bulk when worn under a shell.

Photo 1.The Cerium performs well as a mid-layer, under a shell.
COMPOSITE DOWN MAPPING
Arc'teryx Composite Down Mapping technology applies different materials to different areas for maximum performance. In this case, Arc'teryx combines 850 fill goose down, Coreloft synthetic insulation and ultra-light Aireticaâ ¢ nylon fabrics for a lighter, warmer and highly compressible.

Let's take a closer look at these materials and see how they're used:

ARC'TERYX: A COMMITMENT TO QUALITY
Based in British Columbia, this Canadian brand that is well-known for its high-quality products. Using the latest technology and paying meticulous attention to detail are two of the factors that have put Arc'teryx at the forefront of the industry. As an ISPO award winner, the Cerium LT hoodie certainly reflects the brand's commitment to quality outdoor products.

TESTING THE CERIUM LT HOODIE IN THE PYRENEES
This autumn a member of our technical team decided to put the Men's Cerium LT hoodie to test in the Pyrenees for ski touring and mountaineering in cold conditions.

Our technical expert, Daniel, decided to use the Cerium LT hoodie in two ways: firstly, in the same way as his classic down jacket but with the advantage of the Cerium's lighter weight and lower volume.

And secondly, as if it were his Primaloft synthetic fibre jacket, but with the benefit of the Cerium's greater heat retention? and lower volume.

AS A SUBSTITUTE FOR NATURAL DOWN
Daniel often uses his classic down jacket as a mid-layer when winter mountaineering. After an approach in the dark early hours, it provides good warmth while having breakfast and waiting for sunrise. In cold conditions, it's not unusual to reach the summit with it still on, as his synthetic insulated jacket just doesn't provide enough warmth for those early morning winter conditions.

Ski touring on a cold day in the shade; ideal conditions for the Cerium LT hoodie.
Daniel found the Cerium slightly too thin for use as a classic down jacket at critical hours (warming up after activity or early morning and late night use on the mountain). However, he found that the advanced construction really enhanced the warmth capacity and eliminated cold spots. He was also impressed by its compressibility, as it took up such little space in his pack. When using the Cerium LT as a mid-layer, for ski touring in the Pyrenees, Daniel found it provided excessive warmth. However, it was perfect for warming up on the summit as well as for the downhill ski. His impression, in general, was that it performs well in cold conditions or for early morning and late evening use, but can become too warm as a mid-layer in mild conditions.

Descent
AS A SUBSTITUTE FOR SYNTHETIC FIBRE INSULATION
One of the things Daniel found really surprising about the Cerium LT hoodie was that it convinced him to substitute it for his synthetic insulated jacket on day and multi-day climbing trips. It also performed extremely well as a mid-layer for ice-climbing. He did decide to stick to his old synthetic insulated jacket for use in spring climates; however, in cold, dry conditions, the Cerium provided much greater warmth with lower weight and lower volume.
Tags: test, barrabes, down jackets