Huaraz; the heart of the Andes. Climbing & mountaineering in Peru

by Barrabes  |  Leave your comment
The Cordillera Blanca is in the Ancash region of Peru and extends for 180km from north to south.

On top of Alpamayo
To the west lies another mountain range; the Cordillera Negra, and between them is a valley, known as the CallejÃ³n de Huaylas. The Cordillera de Huayhuas is also in this region, so wherever you look, you can see enormous glaciers as high as 4,000 to 5,000m. Here, is also home to the highest peak in Peru; HuascarÃ¡n, which reaches 6,768m and is one of the most beautiful mountains in the world. And nearby is Alpamayo, at 5947m and the famous âParamount Picturesâ mountain; Artesonraju, at 6025m.

But it's not just high mountains that are in this region. The âParque Nacional del HuascarÃ¡nâ with its 663 glaciers and 269 lagoons is a must for anyone visiting the area. Huaraz is the main town and starting point for mountain sports in the Cordillera Blanca. From sport climbing in the most spectacular areas to boulder climbing at arm's reach of your hotel. Ice-climbing at 5,000m, all levels of trekking and mountaineering, multi-day canyoning and even MTB routes from the mountains to the sea.

Sunset at Camp 1 on Alpamayo
This is, without a doubt, a special place and you certainly won't regret skipping summer in the northern hemisphere.

The origin of these impressive mountains is due to the subduction of the Nazca Plate underneath the South American Plate. The Ancash region is very rich in minerals, agriculture, commerce and mountain tourism.

Unfortunately, global warming is greatly affecting the glaciers, which are retreating more and more each year. It's disheartening to compare past photos with the present and see how much your chosen mountain route has changed over the years.

Churup, 5.493m; a victim of glacier retreat.
Huaraz is the perfect place for relaxing and disconnecting from the mountains. A visit to a tourist office will inform you of things to do, such as a visit to nearby ruins, thermal baths or one of the small climbing walls.

Peru also invites tourists to visit the famous Machu Picchu or Turjillo ruins on the coast and 80km from Lima you can see the Cordillera Central.

Lima is certainly worth visiting for it's historic centre and it still preserves the houses built by the Spanish in 1535, in the Miraflores quarter and is actually quite similar in style, to the centre of Madrid or Barcelona. And if you get tired of sightseeing, it's great for shopping and there's a Starbucks on every corner.

Toti Vales climbing in Los Olivos, with a view of Huaraz
LLACA
Vallunaraju 5.686 m
Easily seen from Huaraz, the Vallunaraju is the nearest 5,000m peak. It attracts trekkers for its easy ascent and is ideal for acclimatizing or as a one or two-day climb, depending on your strength. It offers beautiful views and an incredible sunrise.

Ranrapalka from Vallunaraju base camp
If you're acclimatized, it can be done-in-a-day, by sleeping on the trail or in a day and a half, from base camp. After the taxi dropped us off, it took us 3h to reach base camp, at approx. 4700m. The next morning we reached the summit in 3h and 2 hours later we were back at base camp.

The only gear we needed, was an ice-axe and crampons, a 20m rope and suitable clothing and footwear.

The technical difficulty was very low and there were no complications along the way.

Climbing Vallunarraju
If you walk further into the valley, to the end of the trail, you can find a mountain hut in the most beautiful setting. This place has it all â ice-climbing, sport & multi-pitch climbing, trekking, mountaineering from easy to difficult alpine climbing. The white, crevassed Ranrapalca & Oshapalca mountains close the end of the valley and an interesting moraine divides the valley. To its left, at the end of the trail, are the sport climbing walls â with 0' approach. Approach is 30' if you want to ice-climb and 1h30' to multi-pitch climbs.

âA cuatro patas mirando pal Churupâ
This route was opened by Alex Vicedo & Bru BusÃ³m on 15th and 16th August, clean climbing without fixed anchors 350m at 7a. Good rock and a nice route that includes off width, dihedrals, cracks and slabs and in spite of the grade, it's a very hard climb. Highly recommended, this route can be climbed during a whole day or with an overnight bivy. 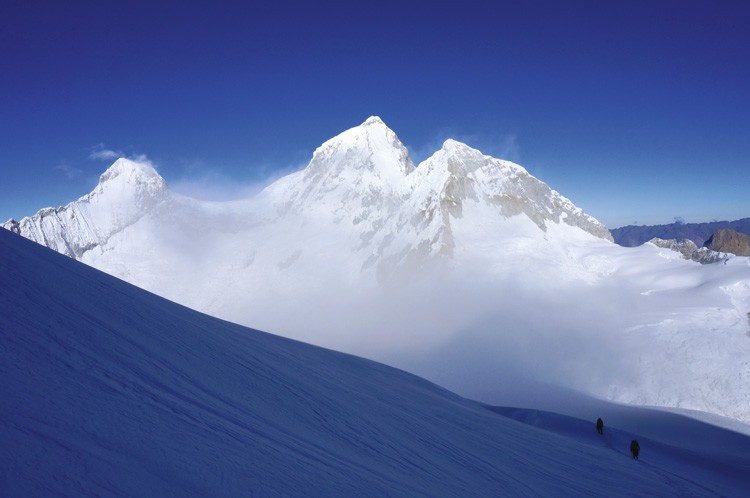 Climbing Nevado Pisco
Pisco means bird in Quechua. A good peak for acclimatizing at 6000m, it's not a difficult peak and has fantastic views.