Cookie Policy We use our own or third-party cookies to offer the best navigating experience and service. If you continue navigating, it will be understood that you accept our Cookies Policy
accept
The Store Blog
Returns and Exchanges:
30 calendar days
BLOG | TECHNIQUE


Handling a rope. Single, half, twin

by Barrabes  |  Leave your comment
Lead climbing requires a great deal of confidence and shouldn't be taken lightly. The risk of a fall is possible anywhere on the wall, regardless of the grade.

Photo 1
LEAD CLIMBING ON DIFFERENT CLIMBING ROUTES
Lead climbing requires a great deal of confidence and shouldn't be taken lightly. The risk of a fall is possible anywhere on the wall, regardless of the grade. Climbing is all about teamwork; collaboration between the leader and the second (or third) on the rope. There's no doubt that the leader has to accept a greater level of risk than the partner belaying below. Its a risk that has to be accepted, providing you have the knowledge and experience required to take it on, because a poorly made decision is likely to result in bad consequences.

You should never feel pressured into leading a climb if you don't have the necessary experience. On vertical and correctly equipped sport climbing routes, a lead fall is safer and more controlled than on other routes, providing, of course, that the rope is belayed correctly. On un-equipped or semi-equipped multi-pitch routes your sense of safety is more vulnerable: the quality and strength of the protection placed during the climb, the ledges you reach on the climb or simply the attention level of your belay partner will all considerably affect the level of risk in the event of a fall.

On mountain routes or on snow or ice, the risk of the lead climber falling is greater still.

The route, handling of the rope, choice of gear, logistics & teamwork, planning the descent, technical knowledge of climbing and self-rescue... all these factors should be studied carefully before planning an ascent as a lead climber.

And the most important factor of all is your safety line; the set of elements that facilitate the absorption of energy if your climbing partner falls.

Photo 2
SAFETY LINE; HANDLING THE ROPE
The rope, harness, tie-in knot, braking system, belay point, karabiners, quickdraws, rope slings, expansion bolts, protection and fixed anchors are the main components of a safety line. If one of these components breaks or weakens, the climber's safety will be in danger. For this reason you must always pay attention to each and every component, from tying the perfect knot to perfectly placing your cam or stopper in a crack.

Of all these safety elements, the first prize goes to the rope. Your rope is the toughest link in the chain and the one that has to absorb most energy when it stops your partner's fall. For this reason, maximum attention should always be paid to handling the rope. The rope should always be in good condition and certified for the right kind of climbing. The type of rope chosen will depend on the type of climbing, the route and logistics used. Basically, 3 types of ropes are used for climbing and mountaineering: single, twin and half ropes.

The most important factor, before using a rope, is to check if it is UIAA certified. It should be certified for the correct use, either as a single, twin or half rope. Nowadays ropes are made narrower and more resistant than in the past, which makes them lighter and easier to handle. Some ropes are even certified for all three disciplines; single, twin and half. 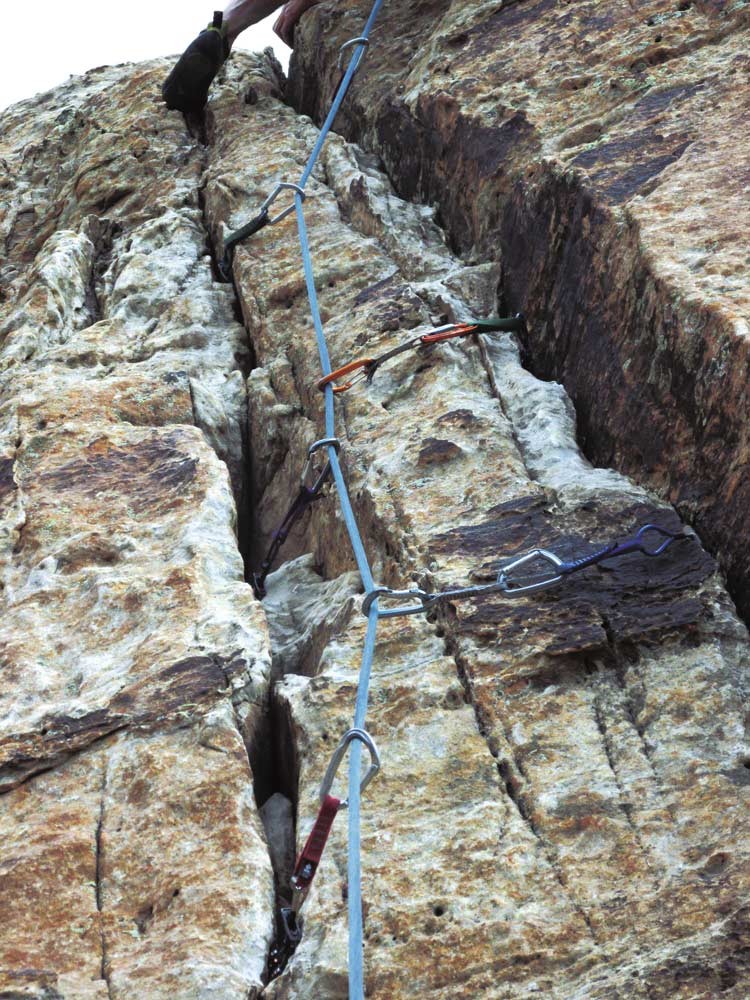 SINGLE ROPES
Single ropes are the most popular, especially for sport or trad. climbing routes. A single rope is always easier to clip into a karabiner. On sport climbing routes, it is easy to use; simply clip the rope into the quickdraws, keeping the rope as vertical as possible until you reach the top and can be lowered back down.

When crack climbing, the rope should stay as straight as possible to avoid causing friction. In photo 1. you can see how the single rope goes through the karabiners in a straight line.

It is important that a lifeline doesn't form too many zig-zags as they will cause friction and drag when handling the rope on rock climbing routes. A straight, vertical line is much more effective, but if the route winds its way up, from right to left, you'll have to pay special attention to the anchors and try to extend their length with quickdraws or slings, so that the rope runs as straight as possible. In photo 2. you can see how the rope is not at all straight and zig-zags its way up, causing friction on the rope.

On the other hand, in photo 3, friction has been reduced by simply extending the anchor lengths with a quickdraw, which keeps the rope straight and in line with the climber.

Photo 4
It is also fairly common to use a single rope for long routes and aid climbs. You just have to pay attention to possible rope friction. The lead climber will often tie another rope to the back of the harness, as in photo 4.

This auxiliary rope is used for hauling your pack to the belay point or so that a third climber can ascend with jumars. It is also useful in case a rappel if needed at the end of the ascent. The belay partner should keep the ropes organized as in photo 5.

Photo 5
You can use a single rope for ice-climbing, but if the ascent line isn't straight, you may need to use a half rope to prevent friction.

TWIN ROPES
Twin ropes are used as in the same way as a single rope. Both ropes are always clipped onto the same anchors, as if they were just one. The advantage is that it gives you an extra rope which can come in use when it comes to a abseiling.

Twin ropes have a smaller diameter and are lighter and easier to handle, so they're very effective on mountain routes. On longer routes a single rope would be more at risk of breaking or deteriorating due to friction or rock fall. 2 ropes are better than one and twin ropes will give that extra versatility in an emergency. In photo 6 you can see the use of twin ropes passed through the same anchors.

Photo 6
HALF ROPES
Half ropes (also known as double ropes) are passed through every other anchor, without crossing over each other and avoiding zig-zags. Nowadays, certified half ropes are narrower. They are very practical for ascents with 3 roped climbers. The leader climbs with both ropes and at the end of the climb the second and third climbers each tie onto one of the ends.

Half ropes are also good for zig-zagging routes as the lifeline can be kept straight by clipping into alternating anchors.

Using half ropes also give the option of having 2 ropes for a rappel if need be.

It's normal to use a half rope when climbing traditional alpine routes. In photo 7, you can see the incorrect use of a half rope. The ropes have been crossed in such a way that friction is unavoidable. To prevent friction, you simply have to keep the ropes separate; one on the right and the other on the left of the climber, so that each rope runs smoothly. In photo 8 you can see the correct clipping in of a half rope.

Left photo 7. Rigth photo 8.
Using a half rope is practical if you have to move away from the vertical ropeline to a traverse during the ascent as the second c
Tags: ropes, climbing