In the event of a fall, itâs good to be able to count on a device that protects against human error.

Veteran climbers tell an infinite number of stories about near-death falls, rope-burnt hands or destroyed shirts from shoulder belaying. With the arrival of the popular figure 8 device or the rudimentary belay tubes, belaying was an improvement from the shoulder techniques, but these devices were still not ideal, due to their lack of instant braking, which made them less safe.

One of the first Grigri prototypes. Photo Petzl.

Nowadays, it is hard to imagine climbing without the tool that has given so much confidence to the climber. This device was named after an African amulet: the Grigri.

When Petzl began marketing the Grigri in 1991, something changed in the climbing world. At last a device was able to block the rope as soon as it became tight. This made belaying much easier and contributed to climbers' peace of mind.

Its working mechanism could not be more ingenious: the tightening of the rope during a fall causes the cam to pivot and block the rope against the fixed part of the mechanism. Petzl's Stop descender for caving, which blocks the suspended climber on the rope, gave the engineers the idea to develop a product that, with few variations, has survived to the present day.

In spite of certain drawbacks, such as being difficult to use for left-handed people or the fact that it could not be used with removable protection or, of course, for climbing with double ropes, these did not prevent it from becoming the star product of climbing sales year after year.

The passage of time and the evolution of climbing, which was increasingly turning towards longer and more overhanging routes, caused the diameters of the ropes to become increasingly smaller. A variety of brands brought out other devices (Faders Sum, Trango Cinch, Edelrid Eddy...) that were compatible with smaller diameters and the old Grigri continued with its recommended 10mm minimum rope thickness. The addition of new colors was the only slight change made to the image of this belay device.

Original and second version of the Grigri.

What was left to improve in the Grigri?

Climbing was already a very popular activity and until a few generations ago, it was the final step of a mountain climb. Now, it began to attract people who had never touched a rock in their lives and consequentlyhad no basic knowledge about mountaineering and the risks involved.

Having someone, who had never touched a climbing rope before, lower you off from a belay point, causes any climber a certain amount of uncertainty, to say the least. Unfortunately, the lack of experience on how to unlock the lever correctly would be the cause of several accidents.

In addition, rope diameters continued to get thinner and thinner. Nowadays, a single rope can have the same diameter as a half rope from not so many years ago and the appearance of ropes that comply with multiple norms (single, half and twin) is now becoming increasingly more present. 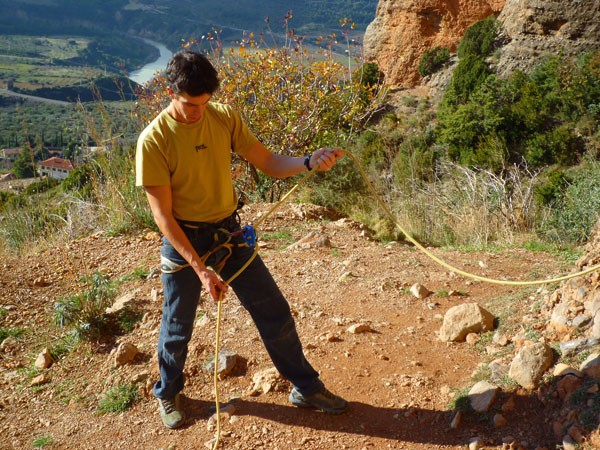 Belaying a lead climber with a Grigri2. Photo Manu CÃ³rdova.

The Grigri+: The Safety of Versatility.

Not long after, in 2017, the Grigri+ emerged. It continues with all the advantages of the Grigri and has added new features that make it very useful in common situations such as testing routes on top rope or having to be unhooked from the belay by an inexperienced climber. To explain them in detail, Petzl has made a video that forms part of a series of tutorials with safety tips, explaining in detail all the features of the Grigri+. Here it is:

What extra features does the Grigri+ include?

It is interesting to understand what the added features of the Grigri+ are and ask yourself if it is going to be useful for you if you are an expert belayer, or if it means you have to belay differently, or if it can be used in the same situations as the Grigri

First of all, both theGrigri and the Grigri+ are used in the same way: We feed the rope with the braking hand and pull the rope out of the device with the other hand so that the lead climber can continue up. When belaying on top rope, we take in slack in the usual way, and when lowering the climber, the process is the same: we pull back on the lever and regulate the speed of descent with the brake hand.

Belaying a lead climber is the same process. Petzl Graphics.

The changes are in the new built-in mechanisms, the wider range of rope compatibility and extra reinforcements, such as the stainless steel plate for increased durability; this way it offers greater protection against abrasion caused by rope friction and is optimized for much more intensive use.

So, what more does the Grigri+ offer? Let's list the changes:

The movement is extremely fluid when feeding out rope. The handwork remains the same, which is perfect for those who are used to belaying with the Grigri, but it is much smoother with the Grigri+ . The wide range of the rope diameters means it is suitable for 8.5 to 11 millimeter ropes, with the optimum thickness being between 8.9 and 10.5 millimeters.

Be careful when testing a rope for the first time. Not all ropes of the same diameter work in the same way, as this depends on the braiding, the condition of the sheath and the treatments applied. It is a good idea to test how a new rope works before you start belaying with it.

The redesigned handle and mechanism are where most differences lie, as these allow a gradual release of the rope on the descent. In the same way that feeding the rope is very smooth, lowering the climbing partner is also very smooth, easy and progressive.

Lowering a climber with the Grigri+.

We have mentioned the accidents that have occurred with all kinds of devices when the belayer was unable to control the speed of the descent. Petzl's experience in work at height products where devices with anti-panic functions are essential, led the brand to introduce this improvement. When lowering, if for any circumstance you lose control of the rope speed, the instinctive tendency is to pull harder on the handle, which would worsen the situation by placing the climber in free fall. However, at this stage, the anti-panic handle automatically engages, blocking the rope completely in the event that the rope runs free.

The anti panic function allows you to lower the climber without any risk of losing control. Photo Petzl

Top rope is one of the best options for testing a route. Climbing with the rope overhead cancels the risk of falling and opens pu the possibility of trying out pitches or simply enjoying yourself with less fear. This is a favourite choice for beginners or those who want to try out a higher grade. The Grigri+ has a top-rope belay mode toggle, which makes it easier to take in rope and offers a more comfortable belay by activating a more sensitive cam lock.

We hope this video and article have helped you know more about the most versatile belay device for sport climbing by Petzl.