Technique: Belaying with a roped team of three

by Barrabes  |  Leave your comment
Climbing with a roped team of three can be as fast and even more effective than with a team of two.

You just need to make sure you have good logistical planning and coordination. Three climbers on a rope facilitate the job on hand as there are more human resources. This can really help when it comes to organizing ropes, belaying one of your team, preparing the gear, organizing your backpack or haul sack, or even taking photos, cooking and setting up a bivy.

On multi-pitch climbs, 3 members can alternate as the lead climber, allowing the others to rest. Three members also facilitate conversation, making a climb more relaxed and enjoyable. In the event of an emergency, it will also be easier to carry out self-rescue operations and help an injured partner.

The trick is simply not to waste time when the second and third team members are climbing. To do this, the lead climber will have to belay both of his partners at the same time, in practically the same way as if it were a team of two. The lead climber climbs the pitch, reaches the belay point and from there, belays his two partners. Belaying in this way has to be precise and secure as both climbers will ascend at the same time, keeping just a small distance between them.

The kind of route and rock form will more or less dictate the distance that should be kept between the climbers. The lead climber climbs with 2 ropes and the second and third climbers each tie onto one of the ends. The kind of rope used will partly depend on the kind of climbing route and several options are available.

1.TWO HALF ROPES. This is a good option for a team of three during a multi-pitch route. The first climber uses two certified half ropes (also known as double ropes) and alternates clipping it to the anchors. Nowadays there is a range of thicknesses on the market, depending on the brand. The important thing is to bear in mind that the rope must be certified for use as a half rope. Half rope diameters are normally between 8 and 9mm. However some ropes are certified for single, half and twin climbing. The larger the diameter of a rope, the less likely the rope will cut on a sharp edge and safety is therefore greater.

2. TWIN ROPES.When using twin ropes, the leader passes both ropes through the same anchor, in the same way as with one single rope. The basic diameter of twin ropes is from 7 to 8mm. However, like half ropes, some brands make thicker diameters for twin climbing. For a team of 3 climbers, a certified twin rope with a thicker diameter of at least 8.5mm should be used. It's important that the ropes are able to withstand abrasion or a possible fall.

3.ONE SINGLE & ONE HALF ROPE This is a very practical option for three climbers. The lead climber uses two ropes: one single and one half. Just the single rope is clipped onto the anchors, as this is the one used for belaying the lead climber. The half rope is tied to either the front tie in point of your harness or the rear haul loop. If the route involves a traverse, this rope will be clipped to the anchors so that if the following climber falls, there's no nasty pendulum.

This same rule also applies when climbing with 2 half ropes. The lead climber has to think of the safety of the next two climbers when carrying out a traverse. If necessary by placing the anchors nearer one another and alternating clipping in the ropes.

Once the lead climber reaches and ties himself to the belay point, the process of belaying the second and third climbers will begin. The idea is that both climbers ascend at the same time to minimize climbing time. Once the leader is ready to belay his partners, the second begins climbing, while the third waits until there's a distance of a few metres, before he himself starts the ascent.

When it comes to belaying both climbers at once, several safety systems are available. Nowadays, there are numerous kinds of belay plates on the market for belaying two climbers simultaneously from the belay point. This facilitates belaying a great deal. Which system is required for each moment will depend the material available and the climber's experience. We will now go over several kinds of belay systems.

To prevent the knots from rubbing against each other, place a third carabiner between them. The ropes are kept parallel to ensure good braking capacity and this also prevents them from twisting. Hold the ropes with both hands to facilitate movement.

In photo 2 you can see how both munter hitch knots are placed incorrectly on the belay, without a middle carabiner. As I mentioned, it's important to prevent rubbing and separate the knots by placing a carabiner between them.

2. GRIGRI ON THE BELAY. The grigri is a good safety system for belaying from the belay point. Two grigris are good for belaying two ropes independently, but most of us only carry one as they're heavy and bulky. In photo 4 you can see a grigri placed correctly on the belay point.

It's important that the grigri doesn't rub against the wall, as this may cause the lever to open, which in turn, would no longer block the rope (see photo 5).

3. A COMBINATION OF THE GRIGRI & DYNAMIC KNOT. When you reach the belay point, if you have a grigri you can use it to belay one of climbers and use a dynamic knot for belaying the other (see photo 6). Place a carabiner between them to prevent rubbing between the two braking systems.

4. GIGI BELAY DEVICE. The Gigi is lightweight and easy to use. It allows you to belay both climbers independently, at the same time. The plate is attached to the belay by using a wide locking carabiner for both ropes, (see photo 7). If the climber falls, his rope will lock, allowing the other climber to continue. In photo 8, you can see how the yellow rope has locked while the black one is still loose to allow the other climber to progress. 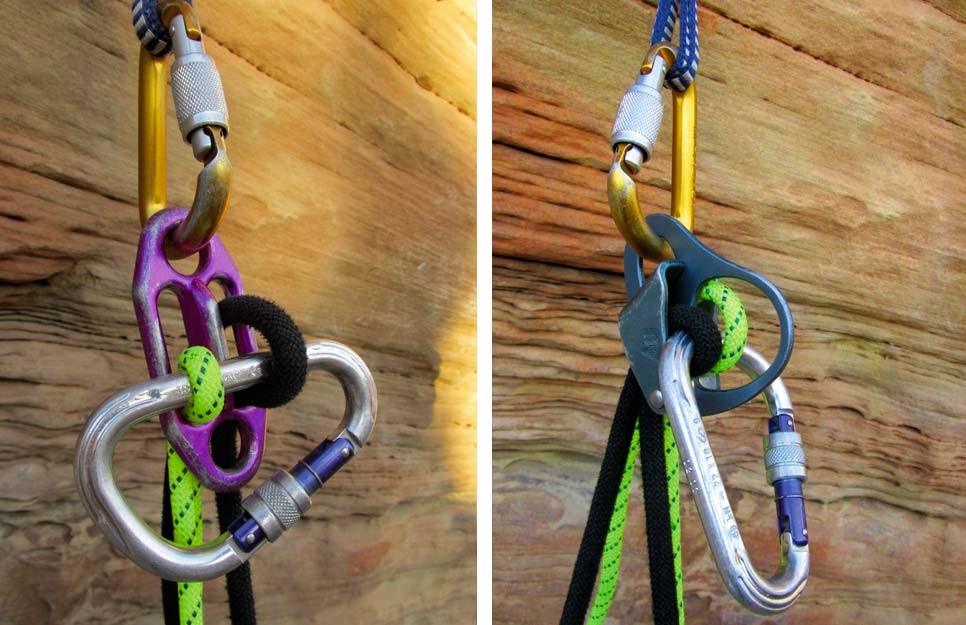 5. REVERSO-TYPE BELAY DEVICE. The Gigi is lightweight and easy to use. It allows you to belay both climbers independently, at the same time. The plate is attached to the belay by using a wide locking carabiner for both ropes, (see photo 7). If the climber falls, his rope will lock, allowing the other climber to continue. In photo 8, you can see how the yellow rope has locked while the